Bitcoin News: Report Claims the Cryptocurrency is Most Overbought Since Q1 2018

A Bloomberg report published April 5, 2019, posits that the ongoing Bitcoin price rally might be short-lived as technical indicators suggest that it is currently at its most expensive level – much akin to the price level before the disastrous price crash during early 2018.

The world’s premier cryptocurrency, Bitcoin, recently took the market by surprise with its dramatic upward price rally. The cryptocurrency was trading around $4,100 more than a week ago, but now it hovers in the range of $5,000-5100. This rise in value, of roughly 25 percent, however, might not last long according to Bloomberg.

Citing data from the GTI Global Strength Indicator, one of the most widely used technical analysis tools, the report notes that Bitcoin is currently overbought by a large proportion. In fact, according to the tool, Bitcoin is overbought by investors at a level similar to its market position just before the spectacular crypto market crash in Q1 2018. 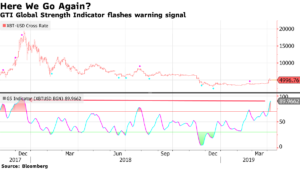 According to the report, similar chart patterns in the past have preceded multi-week or even months’ downturns. The top cryptocurrency jumped further 5 percent on April 5.

“The market got so compressed, volatility was so low, it just went poof! It broke out. It was released from the cage. Now it’s a question of duration and I suspect when you have such a massive bubble, you’ll always have an overhang of people who need to sell.”

This comes after the internet searches for Bitcoin increased three-fold since its surge. Further, there are also speculations running wild in the cryptospace that the steep rise in BTC price is the result of a mysterious $100 million order placed by a buyer.

Conversely, the proponents of digital currencies argue that the bullish behavior of Bitcoin is proof that it has bottomed out, essentially suggesting the end of the bear phase.

However, one should take both the arguments with a pinch of salt as neither there has been any significant technical update to the Bitcoin protocol which could up its price, nor any major institutional investor has announced its plans to foray into the crypto industry.

“It’s nice to see a positive move as opposed to a negative move, certainly. But at the same time, for investor purposes, it’s not a particularly comforting move. Certainly, an investor would much rather see a gradual rise with constant floors in terms of downside being established, as opposed to a very, very quick run-up. It could easily be easy come, easy go.”

Brexit News: Theresa May Warns Brexit “May Slip” If No Compromise is Reached

Tomorrow’s Aeternity Hardfork – All You Need to...