PARSIQ Launches its Blazing-Fast Tsunami API on Arbitrum One 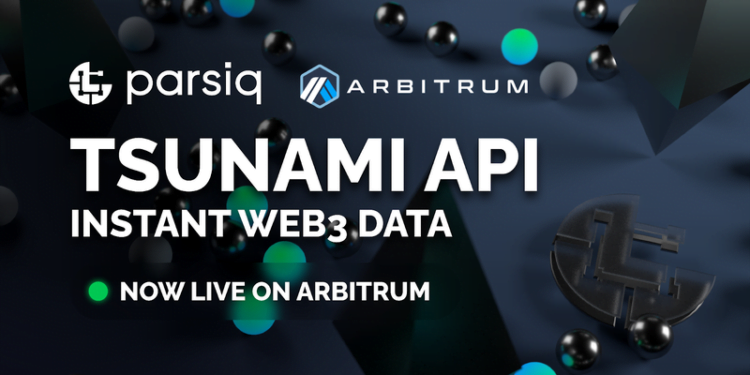 Tsunami, PARSIQ’s lightning-fast API, has been launched on Arbitrum One. The Layer-2 Ethereum scaling solution has already attracted a sizable community of users and developers. Using the Tsunami API, developers can gain access to instant real-time and historical data, which provides advanced querying features and vital monitoring solutions for the ecosystem as a whole.

Accessing and collecting data won’t take as many hours or days, and reorganizing that data won’t take as many weeks as it used to. The procedure can be completed in an instant when using PARSIQ. Never before has it been possible to access the data for all of Arbitrum in such a quick and effective manner as it is now with PARSIQ’s Tsunami API.

PARSIQ is a comprehensive data network that can be used to build the backend of any and all Web3 dApps and protocols. The Tsunami API makes it possible for blockchain protocols and their clients (such as protocol-oriented dApps) to access both real-time data and historical data. Arbitrum is a set of secure scaling solutions for Ethereum that is being developed by Offchain Labs, a startup that was created at Princeton and receives funding from venture capitalists.

Arbitrum is the most successful Layer-2 scaling provider, and it currently operates two live blockchains: Arbitrum One, which is an Optimistic Rollup solution and the top choice for DeFi dApps, and Arbitrum Nova, which is an AnyTrust solution and a home for gaming and social dApps, including Reddit’s community points.

The technologies developed by Arbitrum enable instant scaling of dApps, which results in a significant reduction in costs and an increase in performance, all without compromising Ethereum’s security. Since Arbitrum is fully compatible with EVM, the porting of contracts to Arbitrum does not require any changes to the source code or downloads. Arbitrum updated to its new Nitro tech stack in 2022, which enabled fraud proofs over the main engine of Geth compiled to WASM. This resulted in a large boost in the throughput capacity of the network while also meaningfully reducing the costs of transactions.

A.J. Warner, Chief Strategy Officer at Offchain Labs, said: “With the addition of PARSIQ on Arbitrum One, our ecosystem will now have access to real-time and historical data, allowing developers to work intelligently and efficiently. Having obtainable data is a crucial component to any web3 development, and with the addition of PARSIQ, our community will have customizable data packages available throughout the development cycle.”

Arbitrum One has already established a flourishing DeFi community thanks to its lightning-fast transactions, low transaction fees, and rapid development in acceptance as an Ethereum Layer-2 optimistic rollup scaling solution. PARSIQ is excited to collaborate with key actors within the ecosystem and looks forward to working with Arbitrum, which is a fantastic fit for the PARSIQ Network Integration because of its large and growing user base as well as its emphasis on being builder-friendly.

Users can access raw data from the entire Nitro chain via the Tsunami API. Additionally, it gives users the option to apply filtration techniques, which makes it possible to query the entire history of the blockchain. This can be done, for instance, by the sender, the receiver, the contracts it dealt with by topic, etc. By making raw data available in real-time as well as in the past, platforms are given the ability to track any type of event, metric, or statistic they see fit. Some examples of this include TVL, liquidity, current and historical token values, APR, APY, ROI, user balances, and many more.

Tom Tirman, CEO at PARSIQ, said: “The explosion of the Arbitrum user base and builder community is nothing short of impressive. At PARSIQ we are thrilled to contribute by introducing our game-changing Tsunami API and an array of powerful indexed data solutions for data aggregators, DEXs, and DeFi platforms. We’re excited to play our part in pushing forward innovation by tooling Arbitrum builders with all of their data requirements keeping their focus on product and innovation.”

For as long as projects have needed to make decisions based on historical data, modify and update their metrics, assess the relation of past events, and so on, speed has been one of the most difficult challenges. As developers are aware, the processing of this data can frequently take a very long time – anywhere from a few hours to many days. Reinventing what it means to swiftly and simply access Web3 data, the Tsunami API enables developers to query more than 33 billion blockchain events in under one second.