MobileGo Riding through the Bearish Waves

The MobileGo (MGO) token has beaten all odds and surprised the market by showing positive results as the rest of the market strains under the burden of the bearish market. All indications show that the trend is likely to continue into the near future.

The MobileGo coin was specifically created for the advancement of online gaming. It is a dual blockchain token that operates both on the Ethereum and Waves platforms. Also, the coin is a sister currency to the more popular Game Credits (GAME) platform, which has existed since 2014.

A comparison chart showing the price movement for the last three months on popular cryptocurrency exchanges shows the token has received huge support with the price going up at least four times. The token surged from 36 cents to 63 cents with the huge percentage trading at 45 cents, and this level in the near future can act as new support. Also, this level coincides with the lower boundary of the rising wedge. It is advisable to make purchases if the price reaches the area of 45 cents. 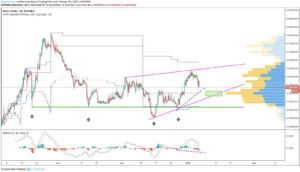 Pundits believe this has been caused by the entry of large buyers who are believed to be supporting it and are likely to continue doing so into the foreseeable future. The development team has also continued to introduce new updates and this could have played a huge role in the developments.

We can also observe that a hidden divergence has formed on the MACD indicator on the 6-hour timeframe – this indicates a possible reversal and local growth.

MGO is a smart token whose creators want to introduce a new era in the gaming industry. The goal was to enable developers to introduce decentralized gaming application through their blockchain. Specifically, they want to gamify the Esport platform and offer gamers loyalty incentives and rewards for participating.

The native token (MGO) is used to enable peer-to-peer tournaments and match play and it is used as the entrance fee and reward token. The company is spending resources to increase its geographical presence and has formed new partnerships with the leading gaming companies. The company says:

“Our ultimate goal is to make MGO a truly global token, traversing geographical borders and making games available to everyone.”

Even though MobileGo ran on two blockchains, the developers seem to have developed a preference for the Ethereum platform where they recently moved all the tokens and are developing swaps that will enable transferring from the Waves ecosystem.

MobileGO raised approximately $50 million via an ICO in May 2017.

The project pays game publishers in MGO, which is considered better than fiat cash and with gaming marked worth $50 billion and over 100, 0000 games joining Google Play and Apple annually, this could be a valuable investment.