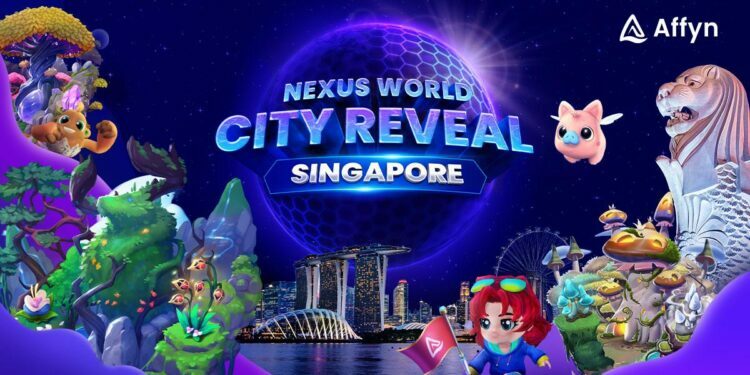 In addition to the current Flag sale, Affyn is making progress on its NEXUS World Metaverse by announcing Singapore as the first Metaverse city in Affyn’s NEXUS World. The first city in the Metaverse has 2,000 plots of Freehold Land NFTs available for purchase, and in the coming months, a great number of additional cities will be introduced.

Affyn is a startup based in Singapore that develops mobile games with incorporated geolocation and augmented reality capabilities by utilizing technology that is powered by blockchain. Affyn is a pioneer in the gaming industry by developing a gaming model with a scalable play-and-earn economy. This model allows players to earn incentives in the game that can be used both in the game and in the real world.

Affyn’s NEXUS World makes use of mobile geolocation elements within Metaverse cities that are directly mapped to the real world. This means that each of the 2,000 Land NFTs in Singapore corresponds with a real-world location. Each plot in Affyn’s NEXUS World is represented by a hexagonal tile with an average area of around 15,047.5 square meters and approximately 65.9 meters on each side.

The “rarity” levels of these plots, which include Common, Rare, Epic, and Mythical, provide an additional classification for them. Within the context of the NEXUS World Metaverse, these Land NFTs provide the function of a digital depiction of real estate. Each parcel of Land is distinguished by its own unique blend of climates and topographic features, which can include grassland, sand, rock, snow biomes, and a great deal more.

There is a correlation between the rarity of a Land and the total amount of features that can be found there. Users that have a higher level of Land will have access to a greater number of perks, one of which is an increased likelihood of producing rarer “Buddies.” Following the completion of the Land’s development, Landowners have the opportunity to maximize their revenue.

They can accomplish it by renting out pieces of their virtual real estate to other players, in addition to hosting games, parties, and other activities. Each Land NFT functions in essence as a small town, with the Landowner serving in the capacity of Mayor. This enables Landowners to develop a diverse array of enterprises on their Land and give services to other players in the game.

The more participants that take part in the activities that take place on Land that is a part of the NEXUS World, the more incentives the Landowner obtains. On top of this, each Land NFT comes with characteristics that provide Landowners with additional benefits, such as the spawning of rare “Buddies” and the attraction of more players. These features are included as part of the purchase price of the Land. In addition to this, owners of Land NFTs will be given access to campaigns and events that are by invitation only.

Affyn Founder & CEO, Lucaz Lee said, “The initiation of Singapore as the first Metaverse city represents a major milestone for Affyn and demonstrates our ongoing commitment to the product development roadmap. We are beyond excited for NEXUS World Landowners to experience the Metaverse coming to life and take part in co-creating and powering the economy. These encouraging developments and more cities arriving in the coming months will prove invaluable catalysts for ongoing Web3 gaming adoption.”

Users who have purchased Flags will be able to stake their claims to pieces of land within the Singapore Metaverse city beginning on December 17 at 12:00 UTC. Users can visit the following link for additional details regarding the NEXUS World Land Sale.