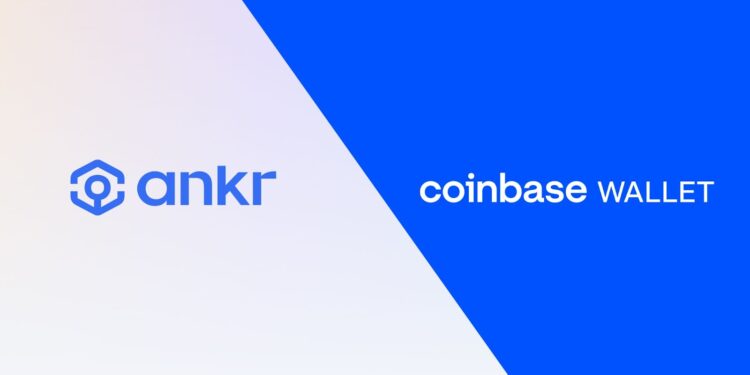 Ankr, one of the most prominent Web3 infrastructure providers in the world, has officially integrated Coinbase Wallet support for liquid staking. It is now possible for users of the Coinbase Wallet to liquid stake on the Ankr Staking platform. This provides customers with a straightforward method of earning yield on the assets that they keep in their Web3 wallet.

Josh Neuroth, Ankr’s Head of Product, said, “Having the ability to connect a Coinbase Wallet was one of the most hotly requested features for Ankr Staking, and that’s a testament to how many people find the wallet useful for interacting with Web3 and DeFi every day. We always want to ensure our stakers are pleased while opening our earning solutions to as many new participants as possible.”

The Coinbase Wallet mobile app includes a decentralized application (dApp) browser that makes it simple to access the most popular dApps and DeFi protocols. It gives users the ability to transmit, receive, and bridge assets immediately on the UI, which makes it helpful when selecting multiple networks, such as Polygon or Ethereum, to retain assets on.

At this time, there are nine different types of tokens that users can stake on the Ankr platform. The Ankr (ANKR) and Gnosis (mGNO) tokens can be used for delegated staking, but the platform also enables liquid staking using Ethereum (ETH), Polygon (MATIC), Binance Coin (BNB), Fantom (FTM), and Avalanche (AVAX).

A Plethora Of Options To Expand Earnings

The newly provided liquid staking tokens are immediately transferred from the user’s Ankr Wallet to their Coinbase Wallet by the Ankr Staking platform. These tokens, when their balances increase each day, will award staking rewards to their holders. When a staker receives liquid staking tokens in their wallet, they have the option of sending those tokens to a DeFi platform in order to potentially boost the number of their rewards through the following:

Since it provides users with greater versatility and capabilities than competing wallets, Coinbase Wallet has quickly become one of the most popular options among Web3 and DeFi users. For a true multi-chain experience, it provides support for Ethereum, all chains that are compatible with the EVM, the Solana blockchain, and more than 5,000 cryptocurrencies.

Ankr is developing the decentralized Web3 infrastructure of the future by providing support for more than 50 proof-of-stake chains, together with a worldwide node delivery system that is the market leader and an RPC aggregator. Ankr has become the largest infrastructure provider for BSC, Fantom, and Polygon chains as of the year 2022.

It is currently responsible for processing more than 2 trillion transactions each year over the entirety of Web3. Ankr offers a number of software development kits (SDKs), such as the Liquid Staking SDK, the Web3 Gaming SDK, and the AppChains As a Service, to assist dApp developers in the creation of Web3 applications in a quick and simple manner.

In order to provide support for the deployment of Web3 stacks, Ankr intends to provide not just a marketplace but also an infrastructure platform. As a consequence of this, end-users and resource suppliers now have the option to connect to dApps and blockchain technology. It is powered by data centers placed in a number of geographic regions in order to increase its endurance and stability.