OTA Foundation board member Ralf Rottmann announced on August 13, 2018, that a Memorandum of Understanding has been constituted and has been signed by all the members of the board. 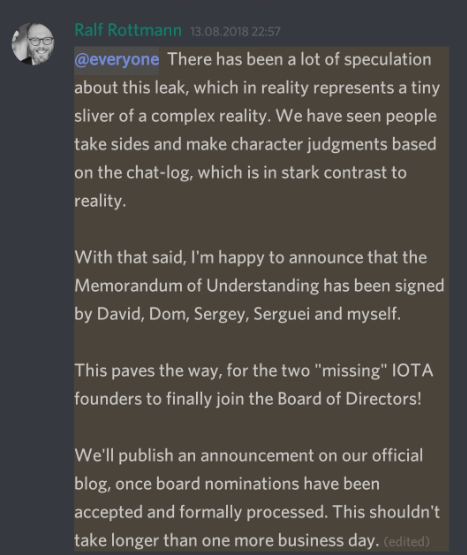 Several other earlier events led to the proposal of a MoU between board members, primarily the heated discussion between IOTA founders on August 8, 2018; A move that was unfortunutely leaked to the cryptocurrency press.

As observed, founders Dominik Schiener and Sergey Ivancheglo stated their distrust of each other, with the latter calling for the ousting of Schiener from the IOTA board:

“I inform everyone that I [no] longer trust Dominik Schiener and I think he should quit the IOTA Foundation for the better future of IOTA.”

A copy of the chat log with Blockchainreporter shows how Ivancheglo expresses his hatred towards Scheiner, with the latter stating the discussion would “not go down without a fight.”

The rest of the chat-log goes into details about how Ivancheglo intends to remove Schiener from the board, and the discussion turns in to a heated argument to which Shiener retorted by stating that he would not go down without a fight.

After the members realized that a chat-log of their meeting had leaked, they issued an official statement in response to the leak on Twitter:

Clarification from the IOTA Foundation Board of Directors and Foundershttps://t.co/AQlQrZiXrH

The clarification from the founders stated:

“Anyone who has been through a heavy growth phase similar to the IOTA Foundation’s, understands that there is a significant emotional journey involved. We have seen friends turn into founders, and founders become key decision-makers in a multi-billion dollar project faced with countless challenges.”

The report also reveals the plot around why  Sergey Ivancheglo asked Scheiner to quit the foundation:

“Certain circumstances lead to a situation, where two of the IOTA founders have been “waiting for board seats” for more than four months. Unfortunately, sufficient priority was not given to this open issue, and there was a failure to keep the missing board members informed about progress. “

The current board has decided, to move forward with inviting the two of its missing founders into the IOTA Foundation Board of Directors, based on a mutually signed Memorandum of Understanding, they said.

The members finally concluded by saying:

“We are committed to having the Memorandum of Understanding and nominations completed no later than August 10th, 2018, and will follow up with an update.”

The foundation has now welcome Serguei Popov and Sergey Ivancheglo to join its board.

Blockchain could be Used to Solve the Britain-Irish...

How to Recover Long Lost Crypto Passwords and...