Tezos Initiates the Upgrade of Kathmandu Protocol on the Mainnet 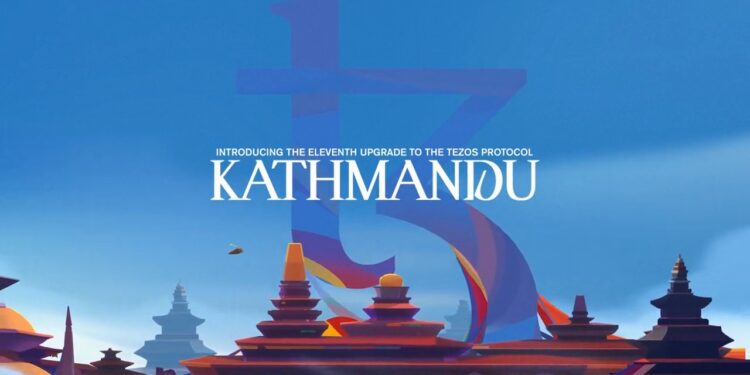 Tezos, known as the blockchain which is based on Layer 1, activated Kathmandu (an upgrade) for the provision of the latest scaling capabilities. The contributors have been active to make this move happen. The proof-of-stake mainnet of Tezos saw the Kathmandu upgrade going live on Friday, as per the team of Tezos.

The very upgrade is the 11th on the platform of Tezos since it was established in 2018. Along with this, the upgrade also offers likely improvements in the scalability of the venue to a further extent. The formal proposal of the upgrade brings to the front that it has incorporated the likely support for the off-chain computation through improved transactional throughput with an efficient procedure of block validation, and excellent roll-ups.

Apart from that, the contributors mentioned that Kathmandu presented a perpetual testnet to experiment with the unique features, along with enhanced randomness in picking delegates on the mainnet for more efficient security, along with the rest of the improvements on the protocol.

The proposal of Kathmandu was carried out in July this year by the contributors of Tezos blockchain and some companies like Functori & Tweag, Tarides, Oxhead Alpha, TriliTech, Marigold, and Nomadic Labs. Later on, it was authorized by the whole community via an on-chain governance procedure. As per Bloomberg, Kathleen Breitman (the co-founder of Tezos) recently stated on 22nd September this year that the venue was structured to be upgraded effortlessly without using any hard fork.

According to Breitman, it has been in the mind of the developers of Tezos while constructing that it could easily incorporate future upgrades. In this way, an official mechanism has been made to make the very procedure considerably seamless and straightforward. While elaborating on Tezos’ upgrades, she specified that the firm thereof has a particular approach toward the innovation due to which periodic upgrades let the updates occur systematically.

As per her, the consensus algorithm of Tezos has been altered a couple of times with diverse improvements to move toward scaling which counts as another huge trial for the blockchains such as Ethereum. She believed that many of such networks do not possess scaling to a considerable level, signifying that a bulk of transfers cannot be handled by them. That is why, she added, the problems like a rise in the fees and congestion.

In the process of contrasting it, she mentioned that the one-of-a-kind upgrade provides a couple of ideas in addition to the technical capabilities that make it possible to include several more people in the blockchain. Breitman, while discussing the carbon footprint and energy consumption of Tezos, explained that since 2018 the respective blockchain has shifted to the proof-of-stake, pointing out that it utilizes considerably less energy along with leaving a very little carbon footprint as compared with Bitcoin (BTC) and other networks which are based on proof-of-work (PoW) consensus.