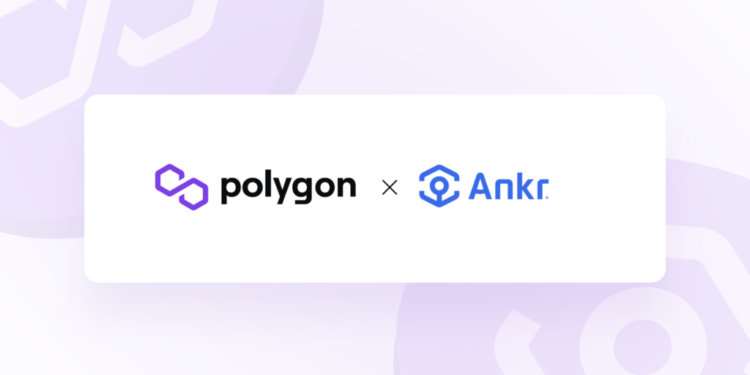 One of the top Web3 infrastructure companies in the world, Ankr, has recently announced that it has collaborated with the decentralized Ethereum scaling platform Polygon. This partnership will make it easier for Web3 developers to use Polygon Supernets to build application-specific blockchains. Supernets are EVM-compatible, interoperable, extremely performant, and customizable thanks to the Polygon Edge modular blockchain architecture.

It provides developers with the ability to establish a decentralized network of their own design without the burden of having to maintain blockchain infrastructure. Developers may deploy decentralized validator sets much more quickly with the assistance of Supernets and Polygon’s experienced validator partners. In the meantime, Ankr has established the industry’s most extensive global node network, laying the groundwork for the development of Web3 in the future.

Ankr presently supports around 250 billion blockchain requests per month across 30 distinct chains and runs RPC operations for 18 blockchain collaborators, making it the industry’s major RPC provider by a significant margin. Ankr also provides a set of developer tools, including the Liquid Staking Software Development Kit (SDK), the Web3 Gaming SDK, and App Chains As A Service, which enables decentralized application (dApp) developers to construct Web3 applications rapidly and without much difficulty.

The infrastructure contract for Polygon Supernets has been awarded to Ankr’s App Chains as the preferred provider. It provides an engineering solution that covers the entire process from beginning to end and combines the greatest aspects of security, throughput, and the freedom to customize. App Chains make it possible for developers working in Web3 to simply create bespoke blockchains that are specifically tailored to their application.

The premium tools and services that Supernets offers are an additional approach in which the company helps developers improve their development experiences. Ankr and Polygon share the goal of making it quicker, less expensive, and less difficult to build on Web3. It is essential to simplify the process of blockchain development while also assuring scalability and app-specific customization in order to make Web3 accessible to the general public.

Polygon Supernets offer developers the ability to swiftly construct up a blockchain network that is tailored to their specific needs and delivers excellent performance. On a Polygon Supernet, it is possible to run any Ethereum-compatible smart contract or dApp, regardless of whether it was built in Solidity, Vyper, or another language. Ankr’s App Chains will give developers the flexibility to pick and select the programming languages, consensus mechanisms, and development frameworks that they choose to employ in their projects.

According to Kev Silk, Ankr App Chain Manager, “To drive Web3 mass adoption, we must provide consumers with a better UX than Web2. Enhancing the UX is possible only by streamlining Web3 development, which is why we’re thrilled to partner with Polygon Supernets and provide developers with the necessary infrastructure to build efficiently. Together, Ankr App chain Infra and Polygon Supernets can supercharge high-quality Web3 games, financial products, and other decentralized applications.”

Web3 developers have the ability to construct Supernets for the purpose of running a particular application, project, or use case. These Supernets are protected by the Polygon protocol, are maintained by certified partners, and receive further updates from the Polygon Edge architecture. By default, all of the Supernets are interoperable with one another as well as the Ethereum blockchain.

Ankr will help tackle two of the most significant challenges that are preventing widespread adoption of Web3: the poor transaction speed and the expensive gas prices. It will do this by giving developers the ability to build their own blockchains atop Polygon Edge. Scalability is permitted to flourish when there is no rivalry for storage or processing because each decentralized application has its own individual blockchain.

In sum, Polygon has partnered with Ankr to provide world-class tools for the development of specialized blockchains. Enterprises, gaming, and entertainment projects are able to fast power up their unique app-specific chains with the help of Polygon Supernets. These chains are fine-tuned for the best-in-class EVM performance. Polygon is assembling the world’s leading Web3 suppliers, such as Ankr, into an ecosystem that will enable any team to develop its own blockchain. It is expected that Supernets will aid in attracting the next billion Web3 users.