GAM3 Reveals 106 Nominees ahead of the Inaugural Web3 Gaming Awards 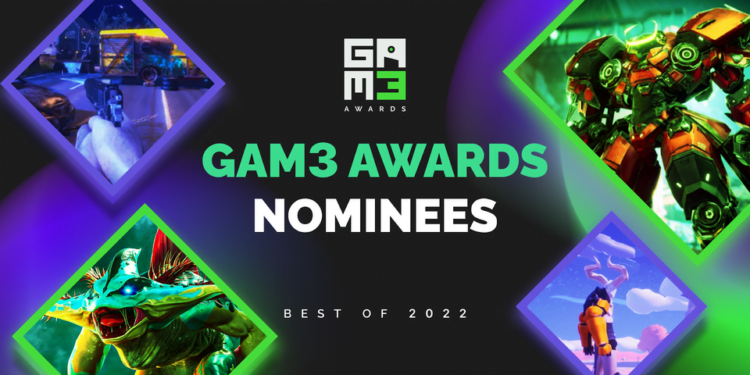 The nominees for the 2022 GAM3 Awards have been announced. The first ever Polkastarter Gaming’s GAM3 Awards event will take place on December 15th, 2022, and will feature a total of 16 different categories. The first round of voting consisted of the jury members selecting their top five games from among 106 unique options that were presented in 13 different categories.

Through this procedure, the pool of potential winners was narrowed down to 32 distinct games, which collectively represent the pinnacle of Web3 gaming. The first 106 games were spread among 13 different chains, with Polygon, BNB Chain, and Solana, in that order, being the top three networks that were represented.

The proliferation of Web3 games across a variety of chains has carried over to the list of the top 32 nominees. Polygon and ImmutableX each have 8 games, which puts them in a tie for first place in the Web3 gaming scene. Solana and Gala are in second and third place, respectively, in the standings.

Omar Ghanem, Head of Gaming at Polkastarter, said: The majority of jury members shared positive feedback on how pleasantly surprised they were to discover a number of hidden gems in the industry and this was further proof the GAM3 Awards is doing what it set out to do, recognize quality Web3 games for their work.”

The GAM3 Awards couldn’t go on without recognizing the work of the best content creator, therefore the organizers had no choice but to do so. Content Creators are the primary forces behind adoption, and they are the ones who are responsible for rallying their devoted communities in support of them.

The list of people who have contributed content to Web3 games is rather large and includes people from a wide variety of countries, cultures, and linguistic groups. In light of this, the Best Content Creator award will be chosen entirely by the community, and each nominee will be responsible for encouraging their supporters to vote for them at gam3awards.com.

A more literal interpretation of the phrase “game acknowledges game” can be seen in the Games’ Choice Award, which is presented annually. In the 15th category of the GAM3 Awards, each game is asked to suggest their personal favorite Web3 game that is not in their own genre. It serves as a gesture of respect and demonstrates that games within the area are all competing against one another in a pleasant manner in order to advance the Web3 gaming industry as a whole.

On November 16th, the voting process for the People’s Choice Award was made available to the general public. This is the only game-specific GAM3 Award that is selected entirely by vote from the community, and it has spawned a movement across games of all types and from all publishers. There were 38 games that each had their own communities and shared tweets and announcements with those communities. The total number of social followers for all 38 games was greater than 3 million.

Simply going through this process qualified more than 50 games for the award, which was based on the total of more than 5,000 individual votes submitted on the site. The nominees for “Game of the Year” in this year’s GAM3 Awards are evidence of how far Web3 gaming has progressed. Five of the most impressive games currently available are Big Time, Illuvium, The Harvest, Gods Unchained, and Superior.

These games blur the lines between the level of quality offered by traditional and Web3 gaming while also highlighting the potential benefits of digital asset ownership and other blockchain-based features. Whoever takes home the Game of the Year award will have done so as a consequence of the game studio’s commitment, hard work, and attempt to establish a community that is united.

At the stage of nominations, both the games and the judges had a favorable impression of the GAM3 Awards and the continuous attempt it is making to maintain the motivation of Web3 game developers to move forward with their work. The following statement from Omar Ghanem encapsulates their comments and suggestions:

“We would like to thank each and all of the 39 jury members involved in the first round of the GAM3 Awards voting. A 100% voting participation despite the task at hand with over 100 game titles to go through, is further proof of how excited everyone is to see the Web3 gaming sector’s development and growth.”

Multiple criteria will be used to evaluate the games, including core loop, visuals, accessibility, replayability factor, fun features, and overall gameplay experience. To be eligible for any of the categories, with the exception of Most Anticipated Game, a game must have a live, playable version that meets the aforementioned requirements. Urvit Goel, Head of Global Games at Polygon Studios, emphasizes the significance of gaming’s contribution to the expansion of blockchain technology:

“It is an amazing list of quality games that really showcase what is coming in the blockchain gaming space. The GAM3 Awards has shown how many quality blockchain games are being built, and the passion of those builders. It’s also clear that Polygon continues to be the leader when it comes to both quality, quantity, and diversity of Web3 games.”

An All-Star Jury To Lead The Event

An all-star jury with decades of expertise in gaming includes Yoshihisa Hashimoto, a former Square Enix CTO who directed games such as Sonic: Unleashed and Final Fantasy XIV Online, as well as Edward Chang, an ex-Senior Director of Partnerships at Electronic Arts. Be sure to check out gam3awards.com in order to view the complete list of jury members who will be casting their votes for the GAM3 Awards.

Justin Kan, Founder of Fractal; Urvit Goel, Head of Global Games at Polygon Studios; Itai Elizur, Managing Partner at Market Across; Rachel Levin, Director of Venture & Strategy at ImmutableX; and Matt Sorg, Head of Technology at Solana Foundation are among the judges whose votes will determine which game developers walk away with a prize.

The vote of the jury will count for 90%, and the remaining 10% will be determined by votes cast by the general public. The community’s vote will be taken into consideration when determining the winners in each category, and if there is a deadlock, it will be the community’s decision that prevails. All of this information will be shared during Gam3’s Livestream on December 15, 2022, which will be available across all social networks.

The inaugural GAM3 Awards 2022 is the annual Web3 gaming awards. The awards are hosted by Polkastarter Gaming, Polkastarter’s first move in rethinking the future of blockchain gaming and honoring the best Web3 games. The event welcomes prominent members of the industry, as well as ecosystems and media sources, and it honors the most talented game developers by awarding them with monetary prizes and services with a combined worth of more than $300,000.

BNB Not Available Trust Wallet - How to Buy?