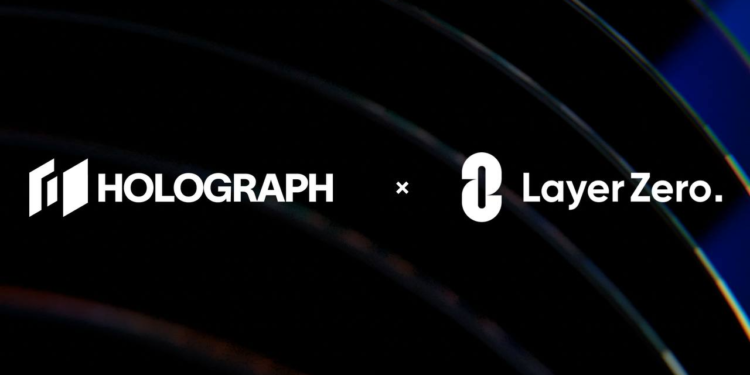 Holograph, an interoperability standard for minting and bridging non-fungible tokens (NFTs), has announced a partnership with LayerZero. Through this collaboration, Holograph will provide its proprietary ‘holographic’ bridge solution. This technology transmits tokens across blockchain systems with comprehensive data accuracy, including enduring smart contract addresses and token identification numbers. Antiquated NFT bridging systems produce “multichain NFTs,” as characterized by the term.

When an NFT is bridged through one blockchain to another, the token becomes immutable on the source chain and a brand-new NFT is created on the recipient network. In essence, it generates a “wrapped” version of the original NFT, which is analogous to a duplicate of the original artwork, but with a separate contract address as well as token ID. Moreover, should the wrapped NFT be transferred to a third blockchain using a separate bridge, a further synthetic NFT would be formed. These NFTs breach their non-fungible features, hence compromising the ownership record and tracing of validity.

The Most Sophisticated Way Of Bridging NFTs

Holograph’s first-of-its-kind bridging procedure utilizes LayerZero’s lightweight cross-chain communication to enable ‘holographic’ omnichain NFTs. The original token is smoothly projected onto a blockchain network, preserving all of its data without wrapping. In addition, Holographic bridging decreases the number of transactions necessary to bridge an NFT and reduces the need to handle numerous gas tokens to complete transactions on both the origin and destination chains.

Additionally, Holographic bridging enables novel and intriguing use cases. A creator may, for instance, take advantage of reduced transaction fees to mint an NFT on one network, then quickly bridge that token onto the other chain with greater liquidity, thus reducing the time it takes to sell. Furthermore, it provides chain-specific NFT attributes that can be proactively modified based on the network it is currently on.

Traders can engage in cross-chain NFT arbitrage to attempt to capitalize on the marginal price differential between NFTs placed in marketplaces on various chains. Holograph makes it possible to establish omnichain NFT marketplaces where traders can buy NFTs from several networks without bothering to obtain the native gas tokens for each network.

Jeff Gluck, CEO of Holograph remarked that Holograph’s omnichain NFT architecture offers creators, developers, and businesses intriguing applications. He stated that they are thrilled to collaborate with Layer Zero’s talented organization to introduce their protocol and make a quantum leap in blockchain interoperability.

According to Bryan Pellegrino, CEO of LayerZero, “LayerZero is excited to support Holograph as its cross-chain messaging solution. Their Omnichain NFT infrastructure aims to unlock a frictionless NFT user experience, onboarding the next wave of crypto users.”

A New Innovation In The Realm Of NFTs

Holograph delivers infrastructure for omnichain NFT interoperability to creators, developers, and organizations. Their goal is to enable NFT compatibility across the whole Web3 ecosystem. LayerZero, on the other hand, is an Omnichain Interoperability Protocol developed for the transmission of lightweight messages across networks. LayerZero offers authentic and assured communication transmission with customizable trustlessness. This partnership between the two companies aims to harness the potential of blockchain to introduce a new paradigm of NFT trading.

Where To Buy A Shiba Inu